Bullet Points
Couldn’t have ask for a better race. 100 miles, no low moments. Beautiful course! Tough on legs but easy on the body (i.e. big climbs but smooth soft trail) 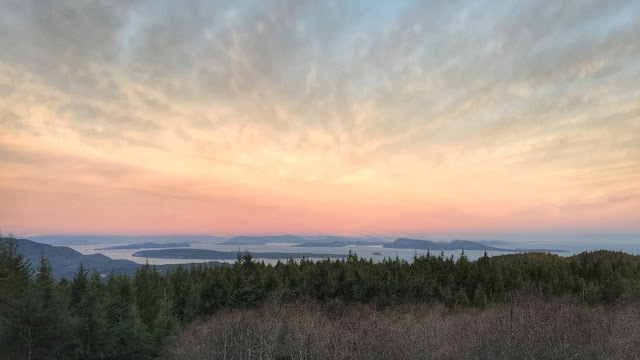 We arrived at on the island from the 11:20 ferry and made our way around the island. After checking in and getting my race packet, I wanted to drive to each aid station and show Mallory where everyone was so that she didn’t have to worry about finding it for the first time on her own. After finding all the AS locations we headed back to the bunk house and then to the pre-race meeting. I was still running off of GA time, so after the meeting we went straight to bed.
I woke up and made oatmeal and had a cup of coffee. The weather wasn’t too bad that morning. It was about 45 degrees and light rain, so it was perfect for shorts and short sleeves. Soon I noticed everyone else layered up in tights, long sleeves, and rain jackets which had me wondering if they knew something I didn’t know. I was very tempted to break out my arm warmers but I stayed with my gut feeling and started in just my shirt. I was the only person who started in short sleeves and shorts.
James, the race director, gave a few words and announced the start and we were off. The race begins with a climb up Mt Constitution Rd all the way up to the Little Summit TH. I knew from driving to the AS the previous day that the road begins at a very gentle grade before turning steep, so I decided to run the road until it got steep. I ran maybe a mile or so before I began my hike for the remaining 2ish miles. I was able to talk to a lot of people around me and enjoyed the company. I started getting two different kinds of remarks from people at this point, one sounded something like “You were smart and only wore short sleeves” the other was similar to “ARENT YOU COLD?!”. I guess it goes to show that people really do operate at different temperatures. I’m glad I decided to stick with just my shirt because it felt great, although I did break a sweat sometimes.
Once we topped at Little Summit TH, we began the steep decent to Mountain Lake AS. I wanted to take the descents very easy to keep my quads from blowing out so several people would pass me on the down. We were warned that this was a gnarly downhill and the race director advised people to walk it, but honestly it wasn’t too terrible. Pretty soon, I seen Glenn posted up with his camera. I smiled for a picture as I passed and continued on to Mountain Lake AS. I arrived and refilled one bottle that I drank with a pack of Roctane I had in my drop bag and headed out.
This next section started out smooth and flat as it contoured around the lake. It then begins a climb up to Mt Pickett. The slope was runnable, but I power hiked it because I knew that I wouldn’t be running it in later loops. I quickly noticed that I was going up a lot faster than the people around me. I also took this as an opportunity to take in all the beautiful old growth forest around me as well as take in more calories. I cannot express the beauty of this course. The forest looked almost magical (or in the words of Mallory, “whimsical”) Once we reached the top, it descends to the Mt Pickett AS. It descended for what seemed like forever until we finally reached the bottom. All the people I passed on the climb caught back up and passed right as we reached the bottom. I had drunk another bottle of Roctane by the time I reached here, but since I had another full bottle and weren’t allowed drop bags here I just checked in and out without stopping.
The next section was by far the smoothest and easiest of the course. It was gentle rollers past waterfalls and creeks all the way to Cascade Lake. I saw Glenn with his camera once again as he grabbed another shot. I also finished off my second bottle during this section. I rolled into Cascade Lake AS and refilled both bottles with Roctane and headed out for the infamous Powerline. 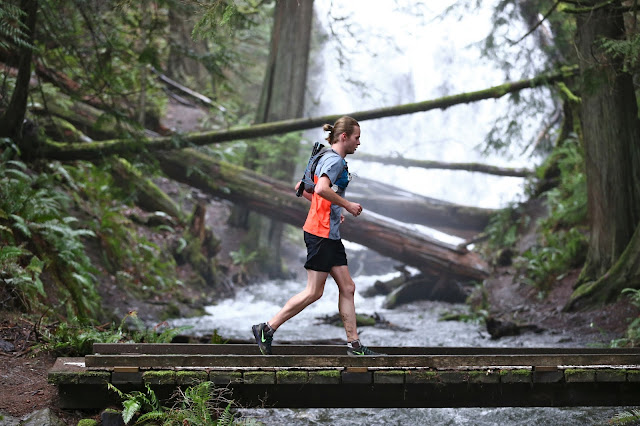 I brought my trekking poles for just this very section and I’m glad I did. I believe using my poles from the very first loop saved me tons of time on my overall race. I caught up to and passed several people on this climb. Byron, a guy from Florida that I met, caught up to me and stayed with me the entire climb. Honestly, I was surprised at the climb. It wasn’t near as bad as I thought it would be. Yes, it was very steep but it was smooth. You didn’t have to worry about footing, you just had to put one foot in front of the other and eventually you made it to the top. Actually once I made it to the top I thought it was just a false summit but once we started to descend a lot on single track, I realized that the powerline was actually over. From reading course descriptions, I didn’t realize how far we went down before climbing back up to Mt Constitution. 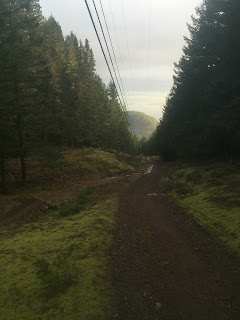 I thought it was going to be a slight drop, then climb right back up…… I was wrong. We descended a lot! All I could think was “Dang, all this down means a lot more up”. Eventually I reached the point where we started ascending again. This section was still steep but much less taxing than the powerline climb. It switched back all the way to the top. Once I reached the Mt Constitution AS, I refilled both bottles with Roctane, put my poles back in my pack, and prepared for the 5 mile descent to Camp Moran to finish the first lap. 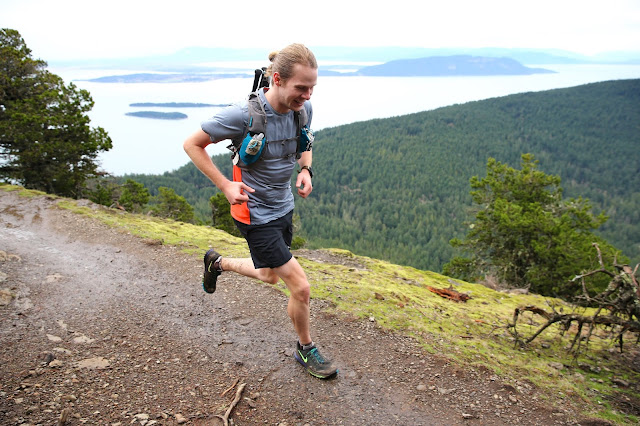 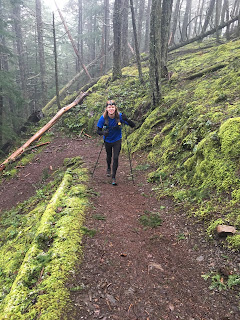 I walked into the AS tent where I asked her to switch jackets with me because I wanted to descend with a jacket that breathed instead of my rain jacket that would make me sweat. I threw my jacket on and was off for the last 5 mile decent!
Phew did it hurt this time. My quads were just about gone. I alternated between power hiking down and a very ugly “run”. I finally reached the road by the lake and knew I had less than a mile to go. I hiked/ran those last few rollers. Once I popped out onto the road I ran the rest of the way to the finish. My official finish time was 26:12. My altimeter watch got just shy of 26k’ of ascent and descent, but with the weather changing I’d definitely call it 26k’. 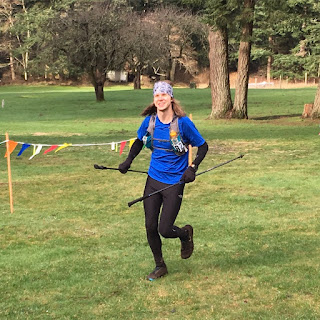 Orcas was an incredibly beautiful race and went extremely smoothly from a runner perspective. You would never guess this was an inaugural year. This race also could not have gone better for me personally. I call running 100 miles without a single low moment or significant blister afterwards a huge success.